When Carolyn Hewitt relocated to the middle-of-nowhere Wisconsin after a stranger knocked on her door and made an offer she couldn’t refuse on her family’s Southern California home, her family experienced quite the culture shock. Carolyn hadn’t really intended to move as far away as the Midwest. They’d planned on buying an oceanside home not to far from their previous one, but kept getting outbid. It was then that they stumbled upon an amazing house in Wisconsin and thought “why not”? Her surfer kids were forced to bundle up in order to endure the “Polar Vortex” that permeated the country during their first Wisconsin winter, and the “horrible amount of snow” they experience made them all “just miserable.” Needless to say, she had her doubts about the move, which put her family closer to Carolyn’s mother and to her hometown, where she hadn’t lived since she was a child. But the new house they’d bought in Wisconsin proved itself more charming than the winters were dreadful. Plus, it came with a gigantic historic barn on the property. 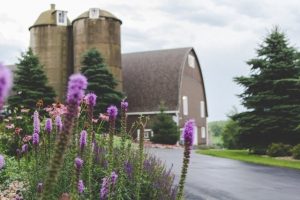 “People kept showing up and asking me if they could get married in the barn,” Carolyn tells us. “So I thought, if I built this venue maybe I could sell and get back to California.” But then the kids warmed up to their new place, started liking school and making friends. It turned out that Wisconsin was actually a great place to raise her family. And so Wisconsin began to grow on Carolyn, too. “Not the winters though,” she laughs. Carolyn totally renovated her 1930’s dairy barn and landscaped the five acres surrounding it, transforming the space into what is now known as Barn at Trinity Peak. From its southern yellow pine plank floors and stunning, vaulted ceilings to its prized stucco silo (the oldest in the state!), Barn at Trinity Peak oozes nostalgia — plus, it’s incredibly Instagrammable. The surrounding woods, wildflowers and elm canopies provide a romantic backdrop and the sprawling grounds have ample opportunity for one of a kind photos. 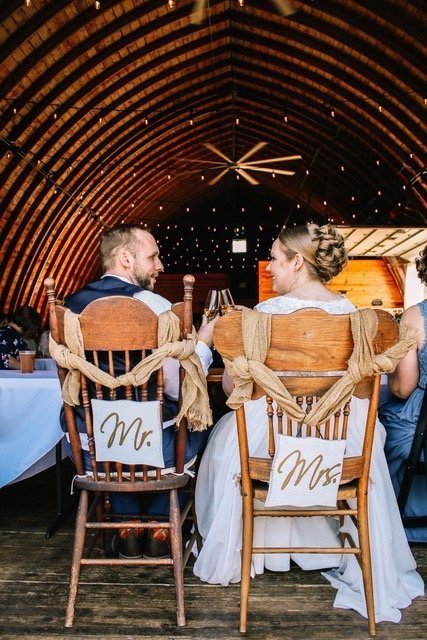 “Barn weddings have really taken off in the last three or four years,” Carolyn tells us. “I get calls daily, it’s the craziest thing! People want to be outside, in nature. It’s great!” Carolyn throws events — weddings mostly, with the occasion fundraiser or anniversary party — from May through mid-November each year. “Just through word-of-mouth, my business grew from about 25 weddings the first year to about 40-50 the second year. In 2018 I had about 60 weddings on the books.” Carolyn’s event calendar is already booking for 2020, which is apparently a year lots of people are looking forward to embossing on custom wedding swag. The Barn at Trinity Peak can accommodate upwards of 200 guests. And because this is Wisconsin, a majority of these guests will likely be enjoying beer, and lots of it, during their respective event.   Carolyn smartly invested in a liquor license for her venue, per state requirements. She learned how to handle the kegs, what to do to keep them cold and how to run a bar. Because she’s literally operating out of an old dairy barn that’s built for milking cows, there were lots of accommodations that had to be made when building out the venue space and bar, especially when it came to the cooler. Her keg cooler is constructed in the space where the cows would stand, so there are steps in the ground and low ceilings. 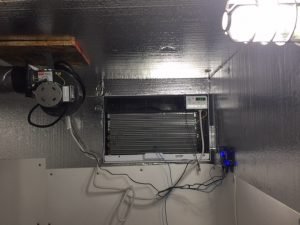 “The barn configuration was going to be very challenging for buying an actual cooler and bringing it in, so I started to look into how to build my own and my husband had recommended the CoolBot,” she tells us. She hired, a local Wisconsin handyman/electrical contractor to come in and check out the space to help her plan and install it. Recently she ran into The Cool Guys, local walk-in cooler troubleshooters. They had never heard of CoolBot before, but after seeing Carolyn’s, they took an extreme liking to our product. “I spoke with him (one of The Cool Guys) again recently,” says Carolyn, “and he told me he’s been recommending the CoolBot to everyone around town!” Some styrofoam, plywood, a standard door and window A/C unit later, and Carolyn’s barn walk in cooler was up and running, full of kegs and white wine. Prior to her CoolBot, she was utilizing a couple of kegerators, but according to Carolyn, in Wisconsin “they love their beer!” so she was constantly afraid of running out during a wedding (worst case scenario!). Carolyn would order the kegs for each event the week prior, hoping they would last for the duration of the party. Sometimes weddings go through 1-2 kegs, but Carolyn has had weddings go through up to eight kegs! Based on the changing needs of her customers, she knew it would be in the best interest of everyone to be able to host a proper cash bar, offering various types of beer and cocktails. “With a cash bar, you don’t run out,” she explains.

“Alcohol is one of the most important things at a wedding.” – Carolyn Hewitt

Once her business model shifted away from ordering booze and beer on a per event basis, she knew she’d need more cold storage. Now, with her CoolBot, Carolyn is able to keep 4 kegs on tap at all times but this way, she can also keep stock on hand at all times. “If I end up with leftover beer, sometimes I’ll return it… or I’ll just drink it all winter!” she tells us. 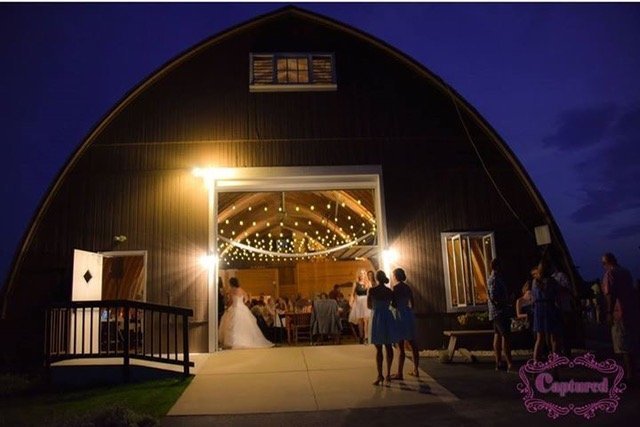 She typically keeps several kegs of Spotted Cow beer from New Glarus Brewery in the cooler, which is what a majority of her wedding clients request. “They (New Glarus) don’t allow their beer to leave the state of Wisconsin, and it’s the #6 selling beer in the nation!” Carolyn tells us. Additionally, she will keep several cases of white wine on hand in her cooler, plus the soda guns are routed through her walk in cooler, too. Carolyn runs her beer lines up through the floor from the cooler and into the bar now to the four taps there. Now she only uses the kegerators outside. She built the cooler strategically right beneath the bar, adapting to her space restraints. Because Carolyn’s event staff is mostly women, they try not to stack the (heavy!) kegs because it’s hard to maneuver around them and swap them out. “Now I can get a lot of kegs in there, probably at least twenty on the main floor,” she tells us. Carolyn is constantly asking herself what the next phase will be with her venue. “What can I add to the barn to make it more desirable? Well, I’ve outfitted the whole barn and five acres in custom colored lights that I can control from my phone. We’ve got these really cool bathrooms in the silo. The traditional Wisconsin dairy barns all used to have these stucco silos, and ours is the oldest in the state! They stopped making those in the 1920-30s, so that’s pretty cool. We call the 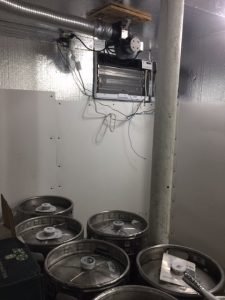 milk barn “the beer barn” and refer to the parking lot as the “cow yard,” which it once was. The venue itself is a real historic barn, with heat and air conditioning, real toilets and modern conveniences. But if you look at it, it’s how it was: a traditional Wisconsin dairy barn, not a venue that was built to look like barn.” Carolyn admits that she’s constantly plagued with worry regarding her events, so she’s invested in a backup generator just incase of a power outage. She is, after all, hosting client’s weddings — only the most important, special party they might throw in their entire life. No pressure. Because of this, she’s looking forward upgrading to the new CoolBot Pro, so she can make sure that her beer coolers are running at the proper temperature remotely from the CoolBot phone app.

“One of my biggest fears is that the power will go down at a wedding and my guests will have warm beer!” -Carolyn Hewitt

Carolyn ends our conversation by praising our customer service staff. “I’m an idiot when it comes to figuring this stuff out. But you guys have been so patient. I’ve called back a number of times and everyone is always amazing and helpful, walking me through everything step by step.” Carolyn’s long term plan includes throwing weddings and events seasonally, allowing her to skip out on Wisconsin winters entirely, spending those months back in Southern California. In the meanwhile, Carolyn can be confident that her clients will always look back on their wedding day and fondly remember how cold, crisp and refreshing the beer tasted at Barn at Trinity Peak.