Amanda Matson and Chris Bourgeois quit their tech jobs a couple years ago and opened TapShack in Ocean Beach in San Diego. And they did it all “debt, loan, and investment free.”

In this article by the SD Voyager, Amanda explains how their “drive to share a healthy product paired with the passion for their community led to the creation of TapShack.” The couple are huge DIY-ers, from physically constructing the space themselves to locally sourcing all of their ingredients directly from farmers. And they’ve recently expanded their business into brewing their own kombucha and cold brew coffee from scratch.

“We started about a year and a half ago and were mostly focused on selling other people’s kombucha at the time,” Amanda tells us. She’s blonde, bubbly and excitable: the poster child for Ocean Beach’s TapShack, a 300 square foot kombucha and cold brew coffee joint that she co-owns with her partner Chris.

“After about a year we decided we needed to make our own product. Once we started producing, our biggest problem was not having enough cold storage. We’d been using several double door fridges, which took up a lot of room in our small space. We knew if we wanted to up our brewing, we’d need a bigger space to store cold product.”

“Kombucha needs to stay cold all the time,” Amanda explains.

One of Chris and Amanda’s friends owns a flower shop and had told them about CoolBot, which they later looked up online. “But we never ordered it. We spent time looking into different options,” Chris tells. “Then, it was my mom who ended up reaching out to you guys and got us more info.” (Thanks, Mom!!)

Chris and Amanda realized that the CoolBot would be perfect for their small place. “Now we’ve got it built out, about 4 x 12 feet long and about 8 feet high. And it’s keeping everything at the perfect temperature,” Chris tells. 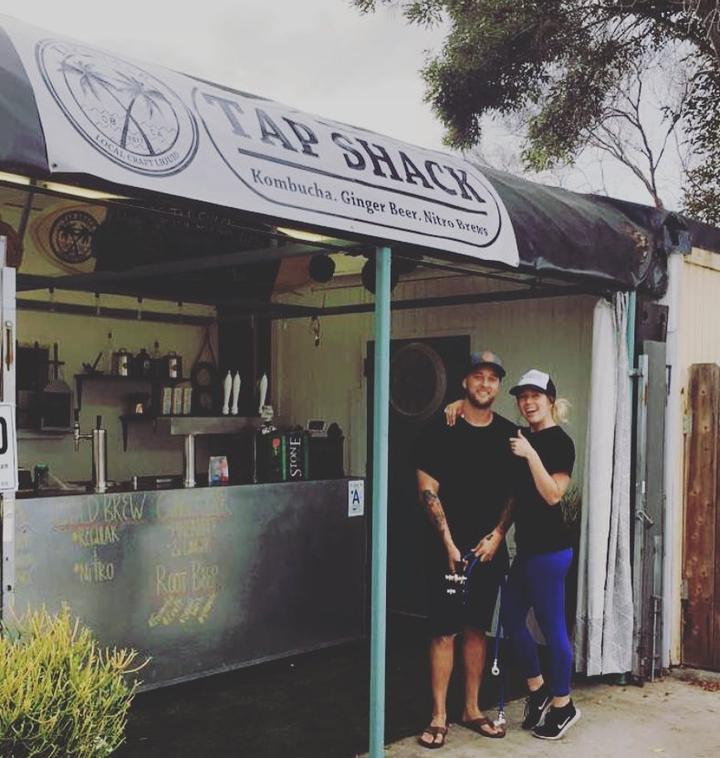 “Oh my gosh, it’s helped so, so much!” Amanda gushes. “We’ve had it for about one month now, and we’re still playing around with the shelves and the inside. We’re looking forward to seeing how we can contour the interior to make it the most efficient. Our CoolBot has helped us to store ingredients for making both the kombucha and cold brew (coffee).”

“It’s honestly the reason we’ve been able to expand. No matter how much kombucha we brew, it’s useless if we’ve got nowhere to store it.” Amanda Matson

“So now we’re able to expand our operation and get a lot more kombucha brewing. Plus we were able to remove the multiple refrigeration pieces that used to take up a lot of room, which we’d previously been using for storage. We had to stack them, which made it hard to maneuver them and their contents around.”

CoolBot is one of the main reasons Amanda and Chris have been able to grow their business. “It’s funny because our space is so small,” says Amanda, “and we like to do things a little bit unconventionally… so CoolBot was the perfect option for us! It was nice being able to build it out ourselves, too. We made a budget and made it totally custom for our space, the exact size we’ve wanted.”

According to Amanda — and we tend to agree — CoolBot Pro’s best feature is its app. “Being able to have that piece of mind is huge. It’s such a stress reliever, being able to monitor the temperature while we’re away. We also really enjoy that it saves a lot of power running off the A/C, versus using multiple refrigerators. I love how efficient it is for our space. I don’t think we’d be able to build anything else without it. It was really easy to get it installed, too. Once the room was built — that took the most time — everything else was super easy. Once it’s on, the CoolBot works almost instantly, cooling down the room in about an hour or less. And it runs perfectly.” 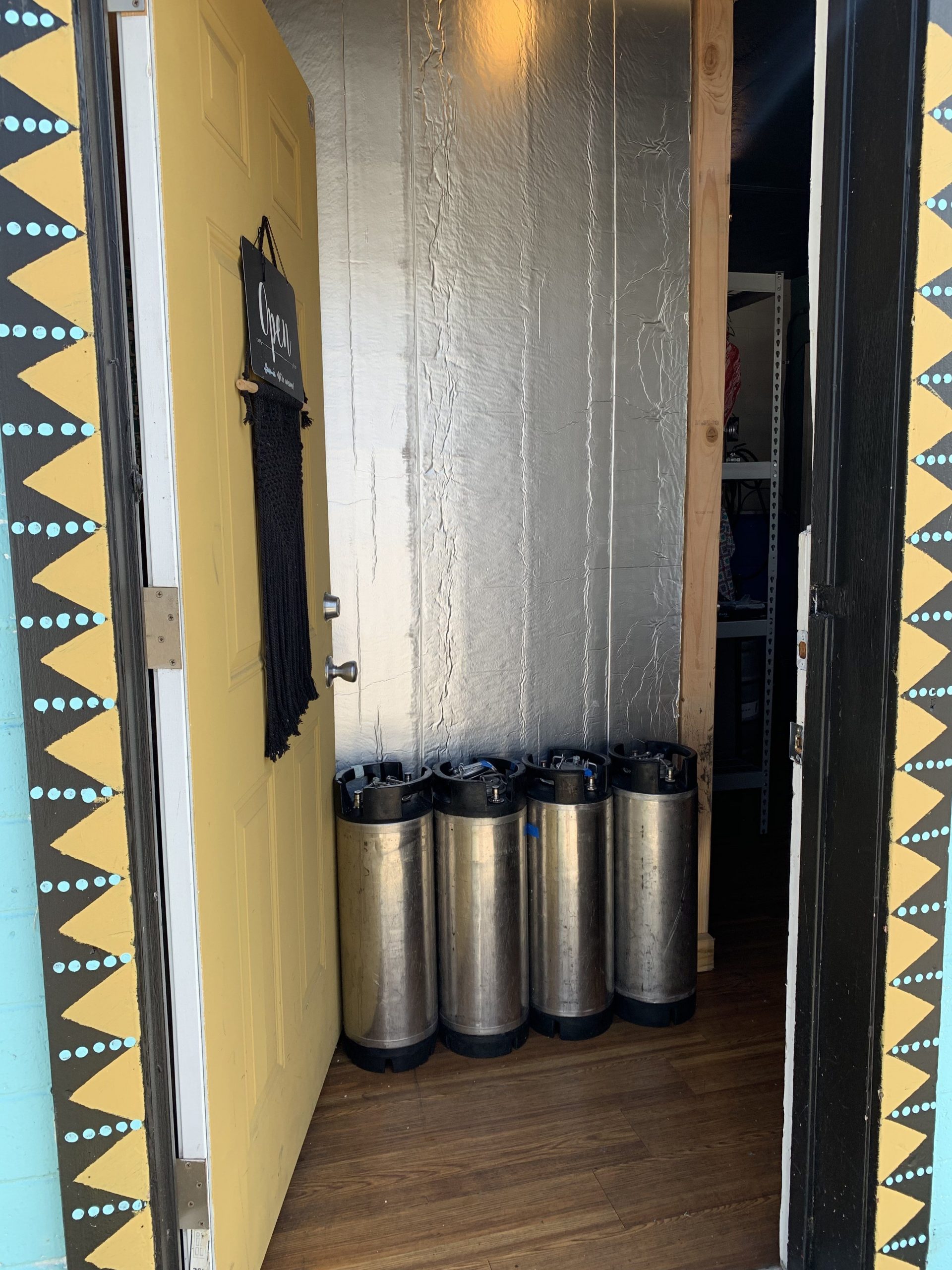 The optimal temperature for storing kombucha is 34 degrees, which is pretty cold. “We wanted to be sure that when we walk in and out of the cooler, the temperature doesn’t fluctuate. It’s been very easy to maintain the temperature, and we track it on the app so we know it’s staying cool.”
Amanda and Chris DIY’d their CoolBot Pro, as they did the rest of their business. It’s kinda their thing.

Because they’re working out of a 300 square foot building, their cooler needed to be exact in size. First, they built out a frame with two-by-fours, then added a door and made the walls out of four inch foam. Finally, they insulated all the corners with refrigeration tape and last but not least, “busted out a window and hung the A/C unit out of that.”

All of their cooler components were sourced from Home Depot, which they both described as being pretty cheap. “Definitely cheaper than buying a walk in cooler,” Amanda laughs.

As far as the kombucha brewing process goes, it typically starts off outside of the fridge. Amanda and Chris have lined the walk in cooler with industrial shelving to hold up to 50 gallons of brew. “We’re not trying to get too crazy with it,” tells Amanda. “We usually have just a couple hundred gallons going at a time.”

Amanda explains to us that kombucha is made up of tea, water, sugar and a SCOBY, a symbiotic culture of bacteria in yeast that feeds off the caffeine in the tea and the added sugar. Then they let it ferment. “The amount of time spent fermenting depends on the external environment,” says Amanda.

“Then the product becomes probiotic and carbonated — and super good for your body! Then we add the flavors, which is where the CoolBot also comes in handy, allowing us to store all of our fresh fruit and herbs. Now, because of the CoolBot, we can buy ingredients for flavors in bulk, versus running to the store everyday, which is what we’d been doing before.”

“As soon as we keg it, we’re selling it,” says Amanda. “Every couple days or so, we have to brew. This will be our second summer open, and business has really been picking up. We stagger a lot of our brewing so that when one batch finishes, another will finish in a couple days… just in case we sell out. The entire process from fermenting to kegging takes about two weeks. We’re growing and expanding, but it’s all up to the kombucha.” 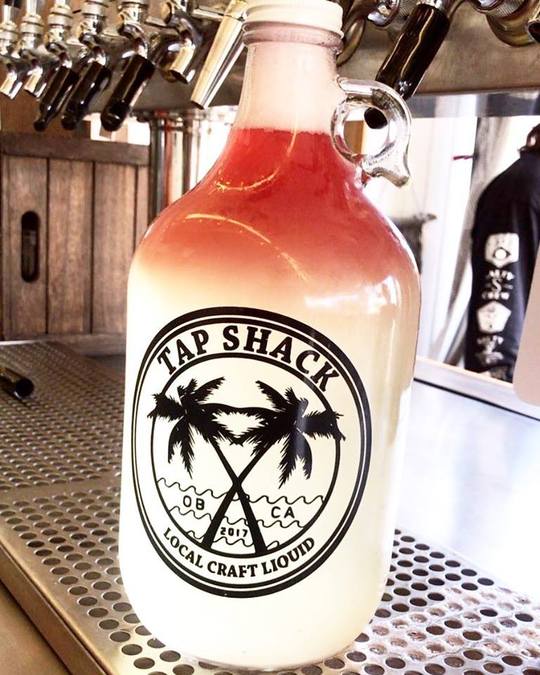 “The cold brew is pretty cool because we do that process all inside the cooler, so it’s a lot easier. We basically let ground coffee beans steep in huge vessels filled with water. That’s basically it! We don’t add flavor to the coffee, sometimes just some vanilla bean to coffee grinds during steeping, but we keep it pretty natural. The cold brew process makes the coffee taste less bitter and lowers the acidity. Then we throw it on nitro to pump it with tiny bubbles that make it taste creamy, like Guiness. We have a stainless steel table in cooler for our cold brewing. And the cold brew tea is the same process as coffee, just with tea leaves.”

Amanda and Chris locally source all of their ingredients for flavoring the kombucha. One of their favorite spots to shop is People’s Co-Op in Ocean Beach, which Amanda describes as “kinda like a grocery store, but you kind of buy into it so you own a little part.” She loves their amazing organic selection, from fresh fruit to herbs and veggies — and they even buy their tea from there.

“We also love In Harmony Herbs & Spices in Ocean Beach. They’ve got really cool stuff, sometimes things I’ve never heard of. It’s always a learning experience, shopping there. We also frequent the local farmers’ markets, both in Ocean Beach and Pacific Beach, for more seasonal flavors. We’ll get whatever’s fresh off the farm. The markets have a random selection of specialty produce, and since we’re still experimenting with lots of flavors, that’s great for us. It’s also an experiment where we’re sourcing from, and we’re working on streamlining that process.”

Amanda describes the popular Dark Magic flavor as “having a strong beet flavor, really interesting and surprisingly delicious!” And everyone loves ginger, she reminds us. “We’re always switching it up and trying to come up with new flavors weekly or every couple of days. Then we like to bulk up on the most popular flavors.”

When asked about any ‘booch blunders, Amanda admits, “You definitely have to take weird risks when you’re trying to come up with new flavors. So many companies do the same stuff and we want to keep it different. We’ve had some come out super weird that we’ve unfortunately had to dump out.” 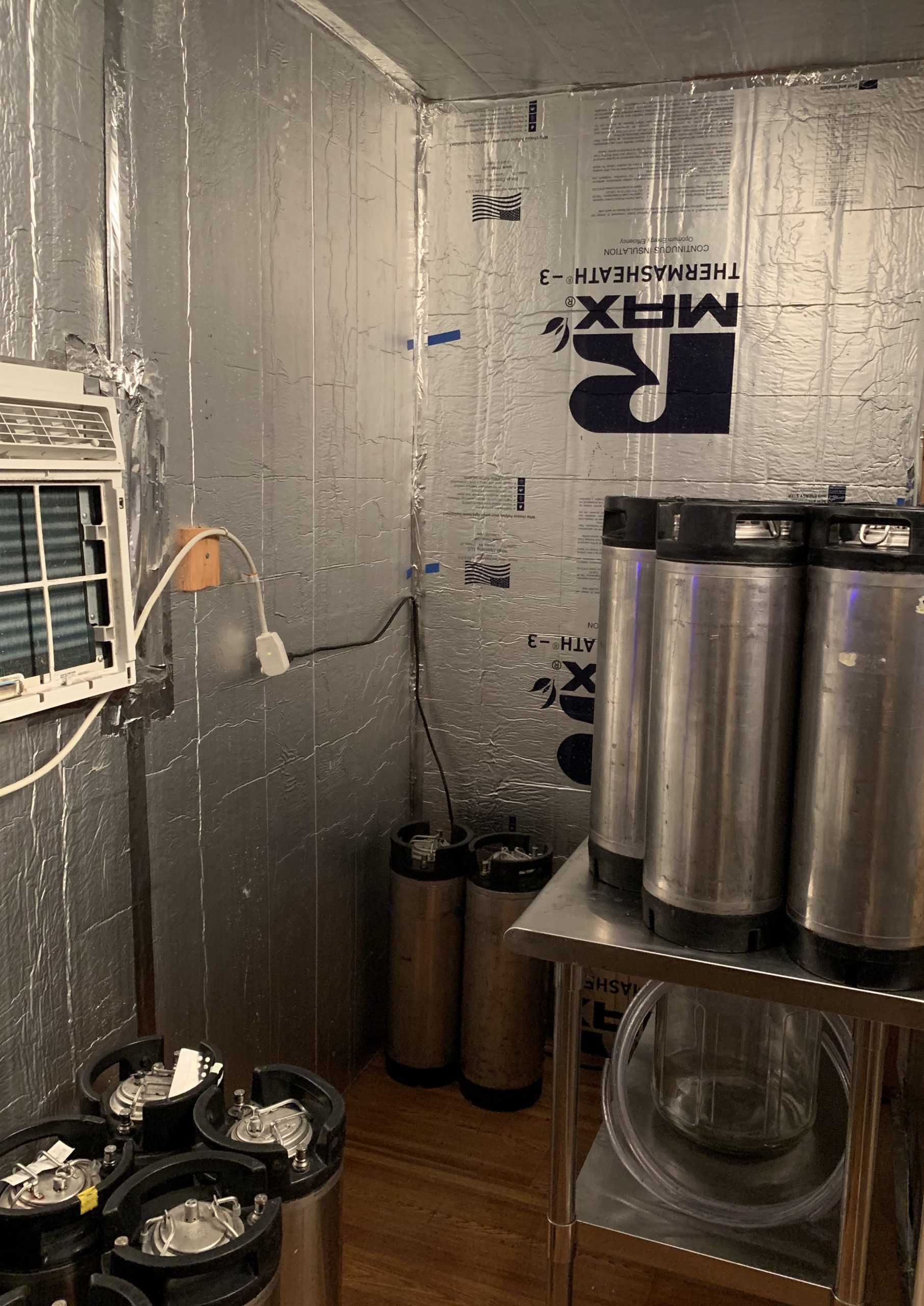 In addition to serving up tasty and quality products, TapShack runs an extremely eco-conscious operation, offering glass growlers or encouraging customers to bring their own (and paper straws for to go cups!). Because TapShack serves its drinks on tap, not only does the product stay super fresh, but they’re producing minimal food waste.
Because their kombucha and cold brew coffee are served on tap, Amanda and Chris would love to eventually run taplines directly to their cooler, but it’s not the most efficient process for them just yet. For now, they hand keg everything straight from the vessel. Running future taplines from their CoolBot cooler would also eliminate their need for a kegerator, which takes up substantial space in their small shop.

When we inquired whether TapShack was planned on outfitting a mobile ‘booch trailer anytime soon, Amanda agreed it would be an amazing idea. “We’re so stoked just to have the van (their “BoochMobile“), since before we were using my little four door to cart around all of our supplies and ingredients. I’m sure we’ll have to upgrade again soon. The van was so helpful, in just one or two runs we could fit all the supplies to build the cooler.” So stay tuned, there may be a mobile kombucha beach mobile cruisin’ around SoCal in the not-so-distant future.

In the meantime, TapShack’s tiny brewery will be keeping San Diego locals healthy and hydrated with refreshing, fizzy beverages and highly caffeinated cold brew thanks to all of Chris and Amanda’s hard work… plus a little help from their new CoolBot Pro.